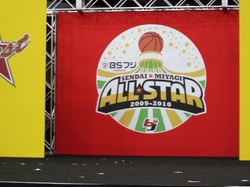 All-Star Games are great for fans. This entry, however, highlights some of the league's big problems.
An unstable franchise in Tokyo, followed by its departure from the league for 2011-12, maybe forever, has left many scratching their heads about the fate of the league's biggest market. It all sends a signal that incompetence is a big trademark in this league.

As a well-connected basketball expert in the United States, with ties to dozens of movers and shakers in the sport, told me in a recent interview:

"I was sorry to hear about the Tokyo franchise. Just another bump in the road for a league that continues to face challenges. It is really not surprising since the Tokyo ownership always thought they could do things their way and, like many westerners trying to do things in Asia, thought they could change the system. As we both know, this is certainly not the case and many have learned this hard lesson over the years.

"...There seems to be many totally incompetent individuals running the clubs and making decisions based on anything but logic and certainly not experience.  I am to the point where I am going to start discouraging players and coaches from entering this crazy mess of a league.  Reminds me so much of the minor, minor leagues in America.....ABA, IBL, etc."